Creating and Measuring the WOM-Worthiness Of New Products: A Case Study
By: Felicia Rogers, Karen Kraft, and Gwen Ishmael

Most word-of-mouth (WOM) marketers would agree that having a great product is a major key to the success of a word-of-mouth campaign. However, coming up with and developing great product ideas that will be talked about can be a daunting task. Additionally, how can a marketer know that an idea is really “great” and will be talked about by consumers? These are the issues that face new product managers in companies everywhere, including one client of Decision Analyst. This company had identified a white space in their market and desired to fill it with a new product offering that would be marketed primarily via a word-of-mouth generating campaign. The client desired to develop a breakout new product that would be both “WOM-worthy” and would meet or exceed established marketing research action standards that they had used traditionally as stage-gates before approving any new product launch.

Knowing that word of mouth would be the primary marketing tool used for this new product, the company partnered with Decision Analyst from the first steps of new product innovation through final testing of the marketing platform to be used at the onset of new product launch. The following outlines the innovation and marketing research techniques used to come up with a new product that would be WOM-worthy and would also score highly on their traditional measures of new concept and product success.

While there are many techniques available for new product idea generation, the task of coming up with a new product idea that would get consumers talking lends itself perfectly to consumer-based ideation. Initial idea generation for this project was conducted via an all-day session among Decision Analyst’s proprietary panel of creative consumers, the Imaginators®. While the Imaginators® was initially developed as a panel of highly idea-centric creative consumers to assist in new product ideation, additional research has shown that this group is also more WOM-involved than the general population in the U.S.

Note: A bold number indicates the value is significantly higher than the U.S. General Population, at the 95% confidence level.

Note: A bold number indicates the value is significantly higher than the U.S. General Population, at the 95% confidence level.

Being both highly creative and more WOM-involved, the Imaginators® were chosen as an ideal group to assist in coming up with a WOM-worthy new product idea. Additionally, during the selection process for this particular innovation session, Imaginators® were screened to ensure that they were highly involved with the client’s category as both product users and WOMUnit senders and receivers.

Over the course of the day-long innovation session, over 500 idea fragments were generated by the Imaginators®. These fragments were then initially evaluated by all key client stakeholders (the marketing research department, new product brand managers, R&D staff, and their advertising agency) and 10 were selected for further development into full new product concepts. Each idea was distinctly different from the others and included at least one feature that could be the “it” factor that would spread quickly, and undistorted, as a WOMUnit in a WOM campaign. The next step was to determine which, if any, of these 10 concepts truly contained that “it” factor.

To determine which of the 10 concepts was potentially the most WOM-worthy, again consumer input was desired. A technique known as Maximum Difference (MaxDiff) Scaling was identified as optimal to use to screen for WOM-worthiness because it is based on the hypothesis that new product concepts that maximize both purchase interest and uniqueness have the best potential for success. Additionally, products that consumers are excited about purchasing and products they find unique are products that are likely to be talked about.

The 10 concepts were tested among 400 potential target consumers identified within American Consumer Opinion® Online, Decision Analyst’s proprietary consumer panel. During the survey, respondents were shown several sets of three concepts each. From among each set of three concepts, respondents were asked to select the concept they would be most likely to buy, and the concept they would be least likely to buy, as illustrated here:

This exercise was then repeated for each subset of concepts; however, in the second exercise respondents were asked to select which concept was most unique and which was least unique. Using discrete choice analysis, preference scores for all of the concepts on both measures were derived from the answers. The preference results were then expressed as scores (from 0 to 100) and mapped to determine which had the most potential for success (i.e., which, if any, scored high on both purchase interest and uniqueness). 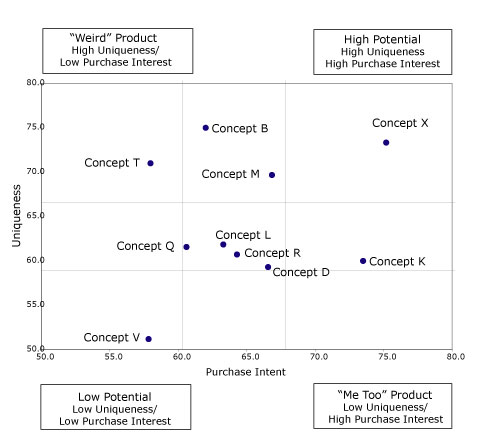 The map clearly illustrated that Concept X was the most promising for further product development. Consumers were both highly interested in purchasing it and rated it extremely unique. The next step was to determine specifically what it was about Concept X that generated such high interest and could potentially be the ideal WOM marketing message.

The open-ended results indicated that most respondents felt that there was one key feature of Concept X that they would tell others about. This feature was then recommended as the centerpiece around which the WOM campaign would be developed for Concept X. The only concern that emerged from this monadic concept test was the product name. Consumers did not feel it fit well with the concept and its key point of differentiation.

Concept X was then exposed online without a name to a group of 15 Imaginators®, who were given the assignment to generate names that would be easy to remember, fit with the product description, and would be something they would recommend to a friend. Over 225 potential names were generated, three of which were selected for final testing. Concept X was then again tested monadically among three groups of target consumers, each group evaluating the concept with a different brand name. One name clearly emerged as the winner, and the advertising agency and brand team put together the full marketing message for one final test before product and WOM campaign launch.

Concept X (now Product X) was tested a final time among members of American Consumer Opinion® Online. Respondents evaluated the concept and full marketing message in conjunction with an in-home product trial. While the product lived up to consumers’ expectations, the marketing message did not clearly communicate the primary benefit of the product. This was the same benefit that was identified as the main WOMUnit which would be sent as a result of the initial concept. The client and their agency then modified the marketing message and it was retested again with the product description. This final check determined that both target and nontarget consumers were still extremely interested and excited about the product and that the new marketing message to be used in the WOM campaign clearly communicated the WOM-worthy benefit of Product X.

Product X will soon be test marketed in five markets. In each market, WOM marketing efforts are planned, with slightly different tactics planned for each. However, all tactics will be centered around the breakout benefit, which was initially generated by the Imaginators® and tested thoroughly throughout concept and product development. Market-level tracking is planned and the survey will measure both traditional measures (such as awareness, trial, and usage, etc.) as well as WOM-centric metrics (WOMUnit creation, sending, receiving, etc.).

The client is extremely pleased and is very optimistic about their new product launch. This system, which was used to generate, develop, and test the idea, enabled them to blend traditional new product development and measurement techniques with techniques that will help them maximize the effectiveness of Product X’s upcoming WOM campaign. This case illustrates that it is possible for companies to come up with the “next great product idea” that will get people talking, without abandoning the time-tested traditional marketing research metrics on which many corporate action standards are founded.