U.S. Economic Prospects Are At A Tipping Point, According To Decision Analyst's May Economic Index

Arlington, Texas—The Decision Analyst U.S. Economic Index stood at 105 in May 2022, a 9-point decline from its recent peak in July 2021 at 114. The Index has been trending downward for the past 10 months, a growing indicator of possible recession. Inflation is reducing consumers’ purchasing power. Supply-chain disruptions continue to negatively affect the economy. The war in Ukraine and economic sanctions are creating headwinds for the world economy. Thus, the Index is signaling the possible onset of a recession in 2022. The Index tends to be a leading indicator of future economic activity. The past-20-year history of the Index is shown below. 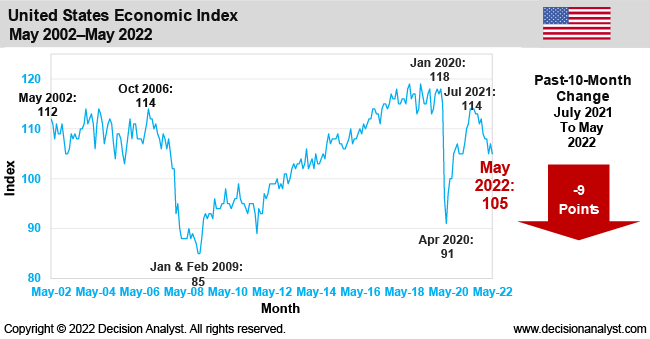 “The U.S. Economic Index has been falling for 10 months now, indicating the possible start of a recession in 2022. The decline in the Index over the past 10 months has been driven primarily by high and rising inflation, supply-chain disruptions, and more recently, by the Russian invasion of Ukraine and related disruptions to economic flows across the world. High inflation rates reduce consumers’ purchasing power and encourage them to postpone major purchases in the hopes that prices might be lower in the future. Inflation is especially punishing for lower-income households, because so much of those households’ budgets are taken up by food, gasoline, transportation, and housing costs—where prices have increased rapidly,” said Jerry W. Thomas, President/CEO of Decision Analyst .

“High inflation rates might moderate somewhat as 2022 unfolds, especially if the Federal Reserve continues to raise interest rates and to reverse quantitative-easing. The Russian invasion of Ukraine will be a major drag on the world economy (and the U.S. economy) for the balance of 2022 and into 2023, as economic sanctions hurt all countries. . “A longer-term threat to the economy is the likelihood that many assets and investments purchased at inflated prices could be underwater within the next year or two as interest rates go up,” observed Thomas.

Planned future purchases (see graphs below) indicate that consumer spending intentions (roughly 70% of the U.S. economy) are strong, but starting to waver in some sectors. The graphs below show the percentages of U.S. households that say they are likely to make various types of purchases in the next 12 months. 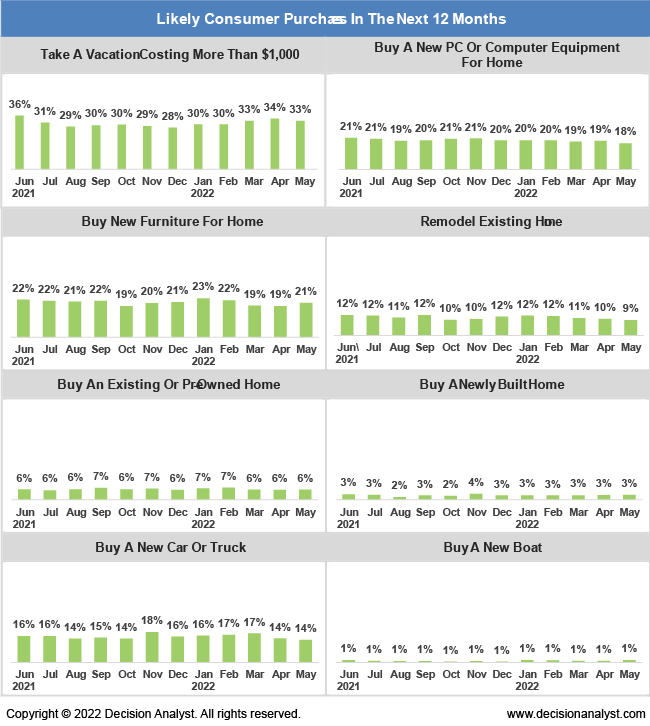 “Overall, future purchase intentions suggest consumers hope to keep spending their money—and this might cushion the economic downturn to some degree, but the overall risks to the U.S. economy are substantial,” said Thomas.