Arlington, Texas—The Decision Analyst U.S. Economic Index stood at 108 in February 2022, the same as it was in January 2022, and down 6 points from the 2021 high point of 114 in June. The Index has trended downward for the past six months, indicating that the U.S. economy will be slowing as 2022 unfolds. The Index tends to be a leading indicator of future economic activity. The past-20-year history of the Index is shown below. 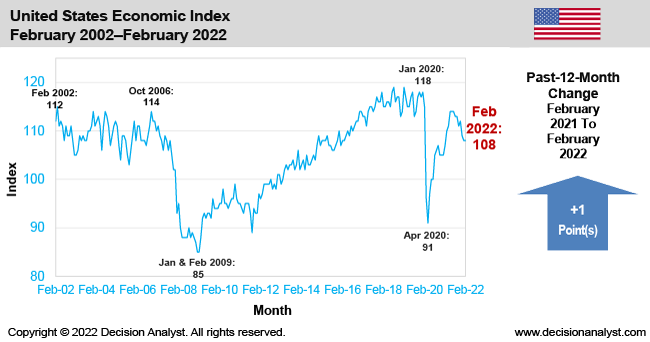 “The U.S. Economic Index has been falling for six months now, indicating slower economic growth over the next six to 12 months. The data-collection time period only partially included the Russian invasion of Ukraine, so the Index is likely to fall further next month when the implications of the invasion are fully understood. The decline in the Index over the past six months has been driven primarily by rising inflation and the rapid spread of the Omicron variant of COVID-19. The high inflation rate reduces consumers’ purchasing power and encourages them to postpone major purchases in the hopes that prices might be lower in the future. Inflation is especially punishing for lower-income households, because so much of the household’s budget is taken up by food, gasoline, transportation, and housing costs—where prices have increased rapidly. Supply-chain disruptions and out-of-stocks have also negatively affected the Economic Index.”

“These major headwinds for the U.S. economy in 2022 should fade away as the year progresses, but the Russian invasion of Ukraine will have negative effects on the world economy throughout 2022. The Federal Reserve might be raising interest rates in 2022, if the Board can muster enough courage. All of these factors point to a slowing U.S. economy in the second and third quarters of 2022,” said Jerry W. Thomas, President/CEO of Decision Analyst. “A longer-term threat to the economy is the likelihood that many homes (and other assets) purchased at inflated prices could be underwater within the next year or two,” observed Thomas.

“Planned future purchases (see graphs below) indicate that consumer spending intentions (roughly 70% of the U.S. economy) are relatively strong in early 2022, but these intentions might not be realized if inflation continues to take its toll. The graphs below show the percentages of U.S. households that say they are likely to make various types of purchases in the next 12 months.” 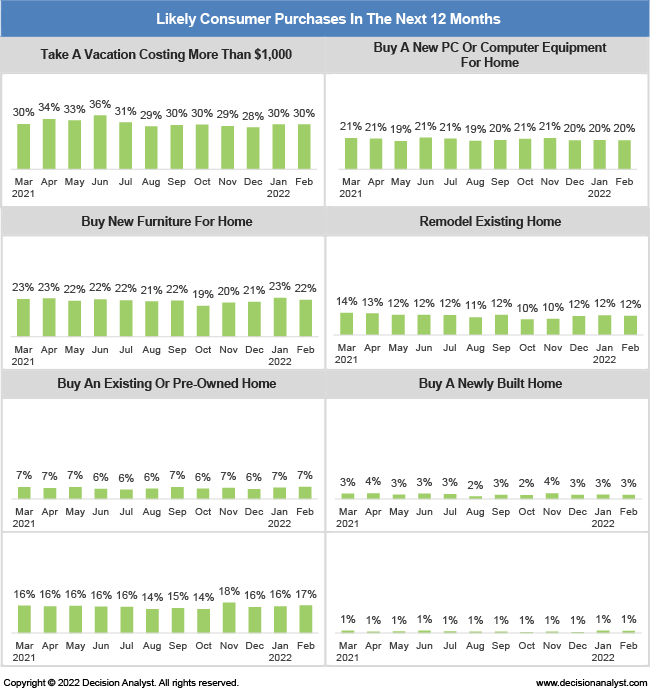 "Overall, future purchase intentions are relatively stable, which seems to indicate that consumer spending will likely remain a positive force in 2022,” said Thomas.