The Decision Analyst U.S. Economic Index stood at 109 in December 2021, a 3-point decrease from November 2021. The Index tends to be a leading indicator of future economic activity. The past-20-year history of the Index is shown below. 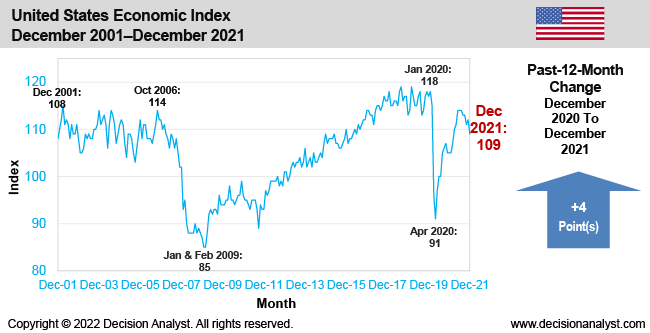 “The U.S. Economic Index continues to rebound from its low point reached in April 2020, but the Index has been falling for several months now, indicating slower economic growth for the U.S. economy in coming months. Inflation is a major worry among consumers and a major barrier to future economic growth. Inflation reduces consumer purchasing power, especially among lower income households where inflation rates are much higher than for the general population. Rapidly rising prices (in contrast to classical economic theory) also leads many consumers to postpone purchases in the hopes that prices will be lower in the future. A second major variable is COVID. The resurgence of COVID, thanks to the Omicron variant, is also dampening economic activity (and public spirits) in the social-interaction parts of the U.S. economy. COVID-19 vaccines are now widely available in the U.S., and a large share of the U.S. adult population is fully vaccinated. Supply chain disruptions and outages are negatively affecting economic activity, although these headwinds should diminish as 2022 unfolds. Many of the government’s economic stimulus efforts are beginning to wind down, a drag on the economy throughout 2022,” said Jerry W. Thomas, President/CEO of Decision Analyst. “A growing longer-term threat to the economy is the likelihood that many homes (and other assets) purchased at inflated prices could be underwater within the next year or two. We still think the economy will continue to grow in 2022, but at much slower rates, compared to 2021,” observed Thomas.

“Planned future purchases (see graphs below) indicate that consumer spending (roughly 70% of the U.S. economy) remains relatively steady for the beginning of 2022. The graphs below show the percentages of U.S. households that say they are likely to make various types of purchases in the next 12 months,” said Thomas. 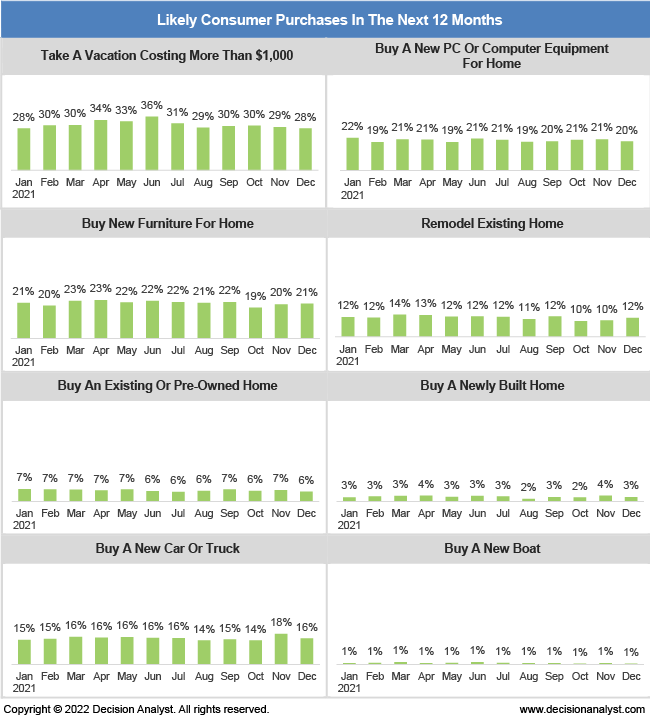 "Overall, future purchase intentions have been relatively consistent in 2021, and seem to indicate that most consumer spending will likely remain reasonably strong in 2022,” said Thomas.