The Decision Analyst U.S. Economic Index stood at 113 in August 2021, a 1-point decrease from July 2021, but still 8 points above where it was 12 months ago in August 2020. The Index tends to be a leading indicator of future economic activity. The past-20-year history of the Index is shown below. 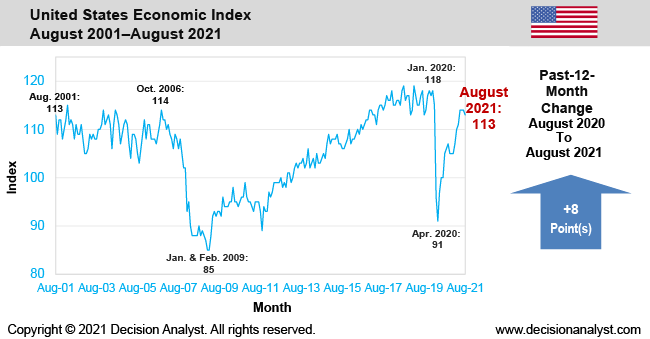 “The U.S. Economic Index continues its rebound from the low point reached in April 2020. COVID-19 vaccines are now widely available in the U.S., and a majority of the U.S. adult population has received at least one shot of a COVID vaccine. This is all positive news, but the Delta variant of COVID-19 is leading to many new cases among the unvaccinated, and hospitals in many states are approaching capacity. Travel advisories are in effect because of the Delta variant, and many people in the U.S. are avoiding crowds at retail stores, restaurants, and entertainment venues. The U.S. economy should continue to expand during the second half of 2021, but the growth rate will taper off during Quarters 3 and 4. Inflation and inflation fears could also slow consumer spending, and supply chain issues are disrupting manufacturing operations and construction activity. Some of the government’s economic stimulus efforts are beginning to reach ‘end of life,’ and this will be a drag on consumer spending during the final months of 2021. Real estate foreclosures should spike in the final part of 2021, another negative factor,” said Jerry W. Thomas, President/CEO of Decision Analyst. “Importantly, year-over-year increases will be more difficult during the second half of 2021, because the same time period in 2020 (the comparison period) was relatively strong.”

“Planned future purchases (see graphs below) continue, on average, to indicate that consumer spending (roughly 70% of the U.S. economy) has fallen slightly going into the fall. The graphs below show the percentages of U.S. households who said they are likely to make various types of purchases in the next 12 months.” 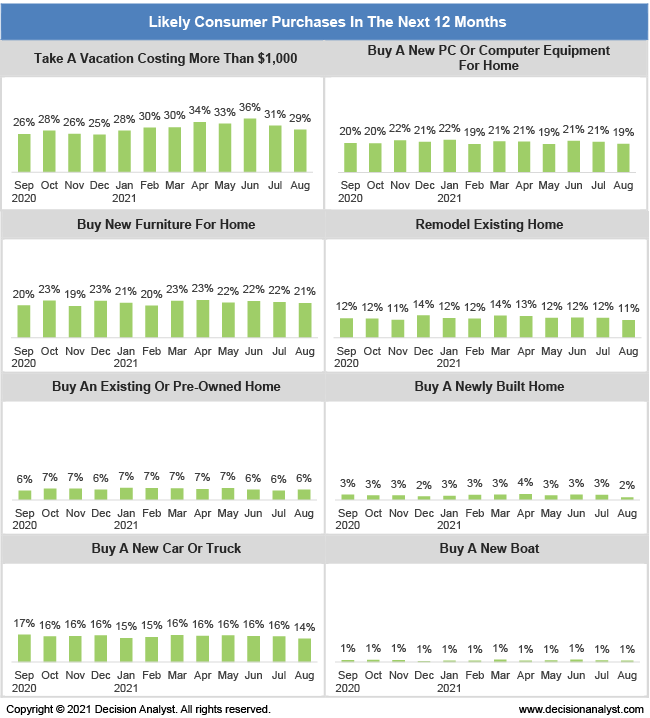 "Future purchase intentions suggest that the economy should continue its recovery for the balance of 2021,” said Thomas, “even though growth rate comparisons to 2020 will become less favorable. Americans are still planning on traveling into the fall, just maybe not as much as in the summer. Home improvements, such as remodeling and new furniture spending, are likely to soften, as inflation and uncertainty take hold. All together, these graphs point to a slowing economy during the balance of 2021 and into early 2022.”