The Decision Analyst U.S. Economic Index stood at 105 in January 2021, the same index score for the third straight month. Since August 2020, the Index has essentially been flat, fluctuating between 105 and 107. The January 2021 Economic Index remains well below the January 2020 time period (down by 13 points). The Index tends to be a leading indicator of future economic activity. The past-20-year history of the Index is shown below. 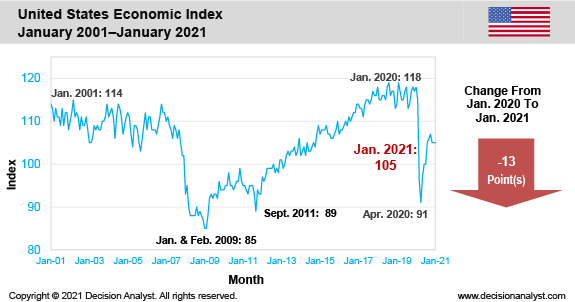 “The U.S. Economic Index continues to signal economic growth for the first half of 2021, albeit at a slow rate. If the pace of U.S. COVID vaccinations continues its upward trajectory, the U.S. could be vaccinating 3 million or more people a day by the end of March. If these high numbers are achieved, COVID cases will fall dramatically in April, May, and June. Many economic activities could safely resume in the second quarter. The good news about vaccination, plus the latest round of stimulus, suggests that the second quarter will see the U.S. economy accelerate at a rapid pace. More governmental stimulus is likely coming, and that will tend to bolster the economy during the second quarter of 2021. A growing risk factor is asset inflation (land, real estate, stocks, houses, etc.), which can serve as a barrier to future purchases and increase the likelihood of higher interest rates. Corporate layoffs and small business bankruptcies are also major risk factors in 2021,” said Jerry W. Thomas, President/CEO of Decision Analyst. “The U.S. economy will not quickly return to its pre-COVID levels.”

“In Decision Analyst’s Economic Index survey, U.S. adults are asked to self-classify their employment status. They have to say they are ‘unemployed but looking for a job’ to be counted as unemployed,” said Thomas. “The U.S. unemployment rate remains at elevated levels, according to Decision Analyst’s tracking survey. In reviewing the Decision Analyst unemployment estimates, the January rate (10.3%) is an increase over the December rate (9.0%). Hidden within the employment data, however, is a downtrend in full-time employment and large numbers of women dropping out of the labor force, probably to take care of children who are schooling at home,“ said Thomas.

“Planned future purchases (see graphs below) continue, on average, to indicate that consumer spending (roughly 70% of the U.S. economy) is likely to remain somewhat stable into the first half of 2021. The graphs below show the percentage of U.S. households who say they are likely to make various types of purchases in the next 12 months.” 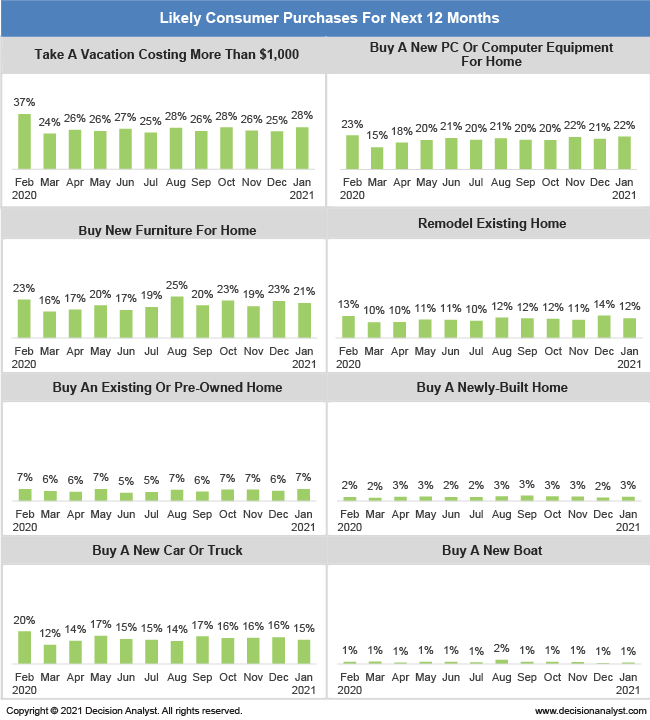 "These future purchase intentions suggest that the economy will be rolling along at its current level during the first half of 2021—with some uptick in pace as the second quarter unfolds. Car and truck sales have stabilized, while remodeling and the outlook for future sales of existing and new homes remains positive. There is also an increase in vacation planning. All together, these graphs point to a slow start for the economy in Q1,” said Thomas, “but with increased growth rates in the second quarter.”